Very pleased to be the featured poet on Todd Swift's Eyewear Blog. Here's the link: toddswift.blogspot.co.uk/2012/08/poetry-focus-jessica-mayhew.html

Roy Marshall also pointed me towards this lovely review of my pamphlet "Someone Else's Photograph:"
http://athingforpoetry.blogspot.co.uk/2012/07/crystal-clear.html
Posted by Jessica Mayhew at 10:50 1 comment: 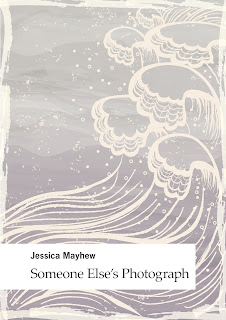 This week, my poetry pamphlet was finalised and sent off to the printers. It’s been an exciting process and it seems strange that soon I’ll be able to hold the last few months’ work in my hands! My mentor, Maria Taylor, was huge help, identifying themes she saw running through my poems, and pointing out when lines seemed too forced or untrue. Then there was the choosing and ordering. Which poems worked better together? Should the pamphlet be divided into sections? I took poems out, put them back in, cut lines, changed titles, obsessed over single words.
Early on, we were told that the cover designs would be patterned as opposed to plain, as many contemporary pamphlets are. I was put in contact with the designers Helen Walsh, and we discussed our initial ideas. I suggested, a bit vaguely, that I thought the sea or birds would make an interesting motif. Helen took my ideas and came back with a beautiful wave design, bordered like a photograph to reflect my title, “Someone Else’s Photograph.” The six covers for the individual pamphlets look lovely together, really like a set. They will be launched at the Cultural Exchanges Festival at De Montford University on Friday 2nd March, and are currently available for preorder through paypal. See the Crystal Clear Creators site for details: http://www.crystalclearcreators.org.uk/ 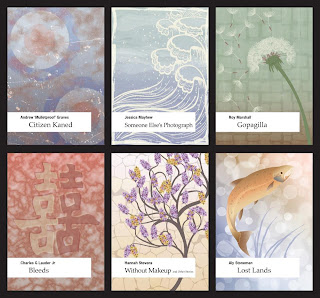 On Monday night, I was invited to give a poetry reading at the Leicester Shindig. The night was run in conjunction with Crystal Clear Creators (who are publishing my pamphlet), and Nine Arches Press. The night was well attended, with many interesting and engaging poets performing. There was a real focus on the musicality of language, and even an impromptu performance of “Timorous Beasties,” in honour of fast-approaching Burns Night.
I really enjoyed the humour in Jonathan and Maria Taylor’s poems, describing a psycho and the experience of teaching Larkin, respectively. The tone contrasted nicely against Maria’s other poem, in which she explored the notion of family and roots, a subject I also like to address within my poetry. I enjoyed reading Deborah Tyler-Bennett’s “Mr. F.’s Lament” in the last issue of Hearing Voices magazine, inspired by “Harris’ List,” detailing the London prostitutes of the eighteenth century, and so I was glad to hear another from the same sequence. Roy Marshall also gave an impressive reading. Roy is another winner of the Crystal Clear Pamphlet competition, and his pamphlet entitled “Gopagilla,” will be released in March.
I have attached a video of my reading at the Shindig, with an introduction by Maria Taylor. Despite being fairly nervous before-hand, (I’m glad there was a bar), I think it went very well. Some of the poems are taken from my pamphlet, “Someone Else’s Photograph,” which will be published alongside Roy’s and the other four winners in March 2012. The Leicester Shindig was a fantastic evening, and I will definitely be attending in the future.
Posted by Jessica Mayhew at 01:43 4 comments:

"The Shipping News" and New Beginnings

One of the books on my A Level English Literature course back at school was Annie Proulx’s Postcards. I loved the book, and the terrible sympathy that was roused for Loyal by the end of the novel. Until this week, Postcards remained the only novel by Proulx that I had read. I had heard good things about The Shipping News, the story of the journalist Quoyle who returns to Newfoundland, the home of his ancestors, following the death of his wife. The ocean is almost a character in the novel, ranging from the quiet, “There’s the sea. Like a door opening and closing,” to the tumultuous waves of “green curlers.”
In her acknowledgements, Proulx credits The Ashley Book of Knots by Clifford W. Ashley as an inspiration for her novel. This encouraged me to think about beginnings. How to start a story? The protagonist of her novel, “Quoyle,” is taken from The Ashley Book of Knots as a name for a coil of rope. The example given is that of a “Flemish Flake,” which is a “spiral coil of one layer only. It is made on deck, so that it may be walked on, if necessary.” This encapsulates Quoyle’s character at the beginning of the novel, dominated by his unfaithful, nymphomaniac wife. Each chapter begins with a quote from The Ashley Book of Knots, helping to develop and enrich the plot.
Taking inspiration from this, I found a book called The Penny Cyclopædia of the Society for the Diffusion of Useful Knowledge. I chose a page at random, which told of the tradition usage of dried kingfishers. This was something I had never heard of, and I have used it as a starting point for a poem and a short story. I think this is an interesting writing exercise because it forces you to move away from ways in which you typically start putting pen to paper. I’ve also found that it’s been a good prompt to fit in some writing in between dissertation deadlines this week!
Posted by Jessica Mayhew at 14:45 1 comment: 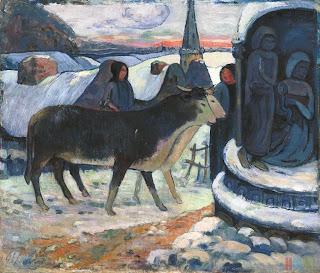 I came across Thomas Hardy’s “The Oxen” today, and thought it was fittingly Christmas-themed now that we have entered December. His poem explores the Christmas superstition that oxen kneel, as they supposedly did in the Nativity, on Christmas Eve at midnight. He recounts the credulousness of his childhood: “Nor did it occur to one of us there/ To doubt they were kneeling then” (ll.7-8). This memory of trust is treated gently, reflected in the idealised portrayal of the “meek milk creatures” dwelling “in their strawy pen” (ll.5-6). Hardy’s poem draws on folk tradition, utilising dialect such as “barton” and coomb” (l.13), to create a sense of authenticity and to evoke the Oral tradition as embodied in the figure of the “Elder” (l.3), largely displaced by the Industrial Revolution.
“The Oxen” was written in 1915, long after Hardy had moved away from his Christian faith. The use of the word “flock” (l.3) to describe the children gathered has strong religious connotations, and reflects the beliefs of his own childhood. By 1915, the First World War was occurring, destabilising the metanarrative of religion as explored by the contemporary modernists.
Hardy’s poem examines this loss of faith, and yet by the third stanza, he imagines somebody calling him back to see the oxen of his childhood. The poem expresses a want to believe; Hardy claims that he would “Go with him in the gloom” (l.15) of his disbelief and of society fractured by war “Hoping that it might be so” (l.l.16). However, the uncertainty of “might” reminds the reader of the credulousness of adult life, and of modern society, ending with a childhood superstition which remains just that.
Here’s “The Oxen”:
Christmas Eve, and twelve of the clock.
“Now they are all on their knees,”
A Elder said as we sat in a flock
By the embers in a hearthside ease.
We pictured the meek mild creatures where
They dwelt in their strawy pen,
Nor did it occur to one of us there
To doubt they were kneeling then.
So fair a fancy few would weave
In these years! Yet, I feel,
If someone said on Christmas Eve,
“Come; see the oxen kneel
In the lonely barton by yonder coomb
Our childhood used to know,”
I might go with him in the gloom,
Hoping it might be so.
Posted by Jessica Mayhew at 09:11 1 comment:

I've written a guest review for Todd Swift's Eyewear blog on Anne Szumigalski's A Peeled Wand. You can view it here:  http://toddswift.blogspot.com/2011/11/guest-review-mayhew-on-szumigalski.html

Jessica Mayhew
I have a poetry pamphlet (2012) with Crystal Clear Creators titled "Someone Else's Photograph." My poetry and fiction has been accepted for magazines including Staple Magazine, Seventh Quarry, Hearing Voices, Coffee House, Party in Your Eyesocket and Cadaverine. I have given poetry readings across the Midlands, as well as at the Ledbury Poetry Festival. I am a graduate of Northampton University with a first class degree in English Literature with Creative Writing.